A Conversation with Negar Mojtahedi on her documentary, “My Dream Goes All The Way to Iran”

A Conversation with
Negar Mojtahedi

On her documentary, “My Dream Goes All The Way to Iran”

“It was important to me to preserve people’s memories, because if we don’t, they will be lost to future generations. The story of Iranian-Canadians is an important one that hasn’t been fully explored yet.”

A Conversation with Negar Mojtahedi
On her documentary, “My Dream Goes All The Way to Iran” 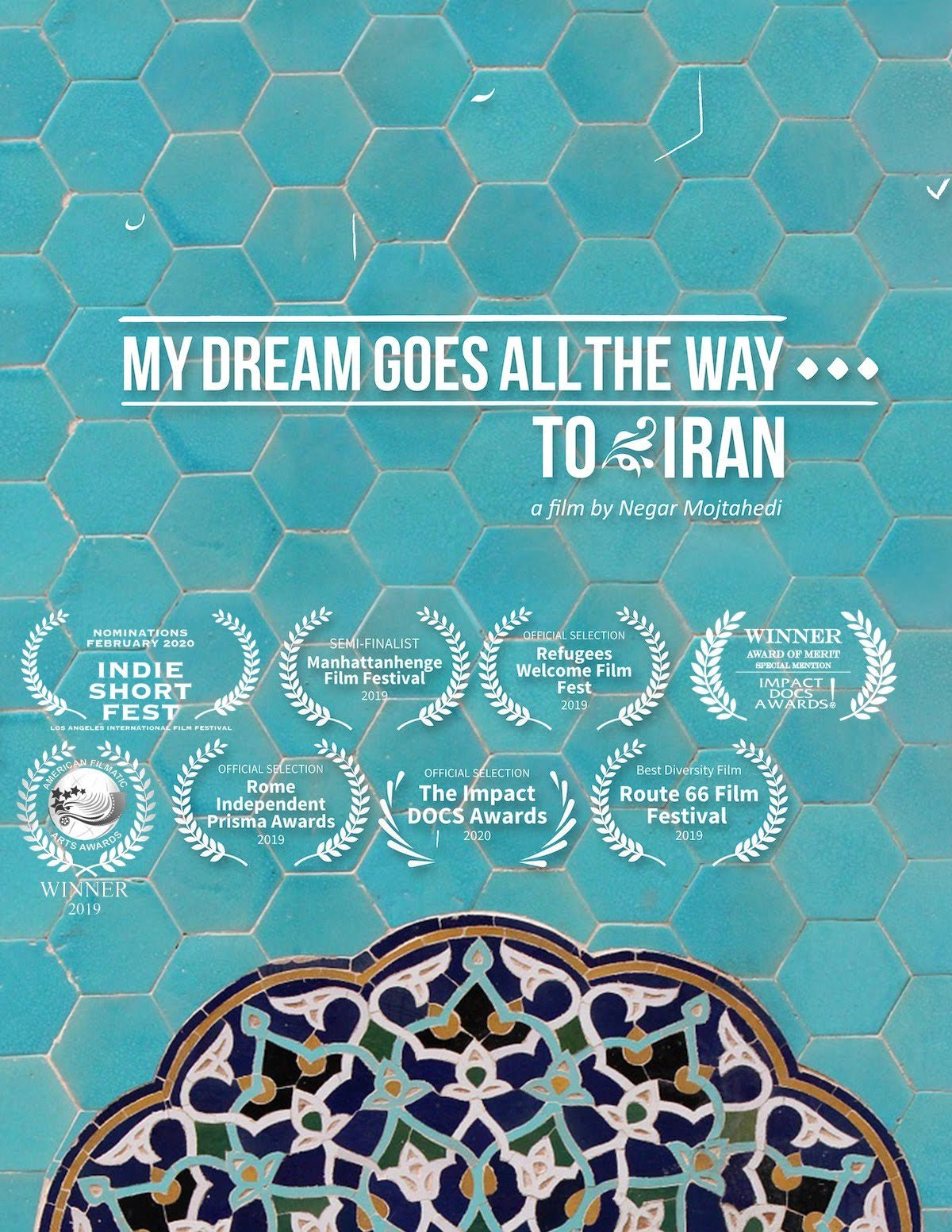 Released in late 2020, Negar Mojtahedi’s multiple award-nominated/winning My Dream Goes All The Way to Iran shares the journeys of six individuals who emigrated to Canada from Iran. Interviews are interspersed with artwork, music and photography, resulting in a project that also offers universal meaning and connection, all under the larger umbrella of issues related to immigration and diaspora.

A long-time Canadian journalist, Mojtahedi’s initial motivation for the film was to honor the close relationship she had with her late grandmother, and her regret that she had not formally documented the latter’s life.

She wisely keeps the focus of the documentary on the six singular individuals who stand in for the more than 200,000 people in Canada who originally hailed from Iran. The participants’ backgrounds are diverse, with some leaving successful careers for a safe haven, others escaping political abuse, and yet others seeking opportunities unavailable to them in their country of origin.

One would think that the stories of a half dozen individuals over 30 minutes couldn’t express the fullness of a society or a person, but Mojtahedi and her talented filmographer and editor Eric Sanderson create spaces that encourage intimate accounts as moving for what they reveal, as well as all that cannot be expressed in words.

The participants share their keepsakes and their memories, entwining us into their lives. They quickly feel like people we’ve known, neighbors we’ve had, members of our own circle, which is the power of immigrancy everywhere. We—or our forebears—have all come from somewhere else, with backstories we may not share readily; leaving one home behind and yearning to create one with new opportunities, with the freedom and safety to create, new memories.

“This film documents the intimate stories of six Iranian-Canadians as they share the most painful and beautiful moments of their journeys from Iran to Canada. It is a powerful portrait of the Iranian expatriate, an immigrant population that is often misunderstood and misrepresented. But it’s also a universal story of what refugees and immigrants face, uprooting their lives for a hopeful future.”

Negar, would you tell us about your journalistic career and how it intersects with this documentary? How did you embark on the latter?

NM I love being a journalist because it allows me to be a storyteller for those who might not otherwise get attention, and raise awareness of important topics. I have the platform and opportunity to dig deeper into societal issues and this documentary naturally arose from my journalism background. Through it I was able to connect with Iranian-Canadians in my community and share their untold stories.

What was your initial intention for this documentary, and did it shift in the making of it?

NM Intention is so critical, and mine was always to bridge the gap between different cultures and also to bring people within the Iranian community all over the world closer together. I wanted to create a film that would break down negative stereotypes and show real people beyond demographic details. It was also my goal to motivate others through such inspirational people, and show that no matter what life throws your way, it is possible to overcome it, rebuild your life and become happy and successful again.

Additionally, given my own background, it was important to me to preserve people’s memories, because if we don’t, they will be lost to future generations. The story of Iranian-Canadians is an important one that hasn’t been fully explored yet. I also believe that people from other backgrounds will feel a connection to our participants, as their narratives reflect those of immigrants and refugees on a universal level.

How did you find the participants? Assuming there were a number of potential individuals in your queue, how did you narrow them down?

NM Finding the participants was no easy task. That took almost a year, involving a lot of research—especially word of mouth within the community at large—and chasing! I knew when I met them if they were the right pick; it was just an intuitive feeling of connection with the individuals on a deep, personal level, much like the way a friendship forms. I also wanted to showcase individuals with different backgrounds to reflect a variety of perspectives.

How did the making of the documentary change your own perspective of being Iranian, Canadian, and diasporan?

NM I am so proud to be both Iranian and Canadian. Making this documentary solidified my belief that our stories shape the story of Canada itself, and ultimately, what it is to be Canadian. It also reinforced my appreciation of the many people in our community who have suffered unimaginable losses and have the strength, resolve and determination to overcome them and move forward with productive lives.

I also learned that you don’t have to choose to be of one culture or another, and that who you choose to be is already an ideal mix of everything that has shaped you in your life, including your journey from one country to another.

What sort of reactions have you had from audiences, and was any of it surprising?

NM The reactions have been amazing! People from all different backgrounds—whether or not they are of Iranian origin—have connected so deeply with this documentary and all the participants. It means so much to me personally to see that universal connection.

Non-Iranian audiences have often expressed to me that they had no idea their Iranian neighbors had gone through so much, and that they have an even deeper respect and appreciation for them. That is an incredibly satisfying result. It has also been interesting to see how particular individuals in the documentary speak to different viewers. I only wish I could have shared the stories of more individuals.

One of the enduring themes of this documentary, from you and from the participants, is about keeping culture and memory alive. How important is that in your own life? How will you keep that going in your own family?

NM Yes that’s key! Memories help shape who we are and what future generations may become. Being a journalist, filmmaker and above all, storyteller, is how I intend to keep memories alive, for myself and others.

What was the range of dates that these participants entered Canada? How do you feel the year they emigrated changed their experiences?

NM I would say a majority came after the Revolution but some came after the Iran-Iraq war or during it. And yes, when they came helps shape their perspective. As you saw in the film, there are certain events that they witnessed that were life-changing.

How has the making of the documentary changed the lives of the participants?

NM They have told me they were grateful that I explored aspects of their lives, not just as a positive and heartfelt depiction of their personal journey but also as a way to preserve it for future generations. That matters so much to me as the making of this documentary came straight from my heart. The participants offered so much of their own hearts in their narratives, with such vulnerability, and thoughtfulness that I feel that we will be lifelong friends.

One of the things you do so well in this piece is to reflect the politics—because many of these diaspora stories wouldn’t have occurred without the political environment of Iran in the 70s and beyond—yet keep the focus front and center on the individuals and their stories? What were your thoughts about “capital P” politics and personal politics in this piece?

NM Thank you for noticing that! My belief is that nothing divides people more than politics – or the “capital p” as you call it! I wanted the focus to be on the individuals and their stories on a deep, personal level in a way that would bring people and communities together. I thought the best way to accomplish was to focus on personal, human experiences. For me, mixing politics with that would have detracted from that genuine emotion which is what I seek in all the stories I tell, journalistically and otherwise. Especially with our relative brief running time, my focus was entirely on the individuals.

What would you like people to take away from this documentary?

NM One of my first goals was that audiences would see Iran, Canada and being Iranian-Canadian from a fresh perspective. It’s equally important to me that viewers appreciate the sacrifices these participants have made; not only to their own/their families’ lives, but also their commitment to Canada, their chosen home. And certainly I want viewers see immigrants/refugees in a positive way and find inspiration to overcome their own obstacles.

How has your own family experienced this documentary?

NM They loved it! They were so proud and I hope my grandmother’s spirit can feel the energy and love coming from this documentary and know that she and her passing played such a central role in my accomplishment. It’s equally gratifying that my family also connected with individuals in the documentary, and that we continue to have a connection even after filming was completed.

My Dream Goes All The Way to Iran is available for streaming on Vimeo. It will also be available to watch on ShortsTV via Amazon Prime starting on April 19, 2021 for viewers in the United States.

Negar Mojtahedi is a journalist and award-winning documentary filmmaker from Vancouver, B.C. She is passionate about storytelling and uses her skills to help people, raise awareness of different causes, and bring communities together. Negar believes the heart of every story is emotion. She is the proud mother of baby Nousha and her four-legged child, Pasha. Find her on Twitter @NegarMojtahedi and on Facebook. More at www.mydreaminiran.com.