“Show me one beast / that loves itself as relentlessly / as even the most miserable man. / I'll wait.”

There is No Such Thing as an Accident of the Spirit

You can cut the body in half
like a candle to double its light
but you need to prepare yourself
for certain consequences.
All I know about science—
neurons, neutrinos, communicable
disease—could fit inside
a toothpick, with wood to spare.
Blow it away, like an eyelash or
lamplight. Show me one beast
that loves itself as relentlessly
as even the most miserable man.
I’ll wait. Verily, they sent down
language, filling us with words
like seawater filling a lung. You
can hear them listening now
for our listening. Ask me again
about my doubt—turquoise
today and almond-hard. It speaks
only of what it can’t see itself:
one chromosome bowing politely
to the next, or the way our lips still
sometimes move when we sleep.

Ghazal For a National Emergency

A man selling water on a median sweats into his eyes. The cars blur
into a string of silver anchors, pinning the world to Washington.

Loss is a vector, all magnitude and direction: computers detect a pear
rotting under Damascus rubble from all the way in Washington.

Lives pile up like constellations, diamonds on black silk ready to be
set in God’s crown. Fetch Him, and bring Him back to Washington.

Tulip trees crack in the heat, then shatter into crosses, paper
pulp. Embrace your rage and this will be easier, winks Washington.

Satan is a long bone shucked hard from the mouth that grew him,
a great elephant tusk shooting up out the grave of Washington.

The dead want too much. To scare the living, they gasp their old names—
the living panic, plug their ears, and send their dread to Washington.

Trust God but tie your camel. Trust
God. The bottle by the bed the first

Buying raspberries to
watch them rot. Dipping bread in water.

Trust. You find a gold tooth washed up
on the beach. So long in coming. Gurfa:

the volume of water that can fit
in your hand.

Trust God.
The volume of your hand.

From Graywolf Press, publisher of Pilgrim Bell (Graywolf, August 3, 2021), where these poems will appear 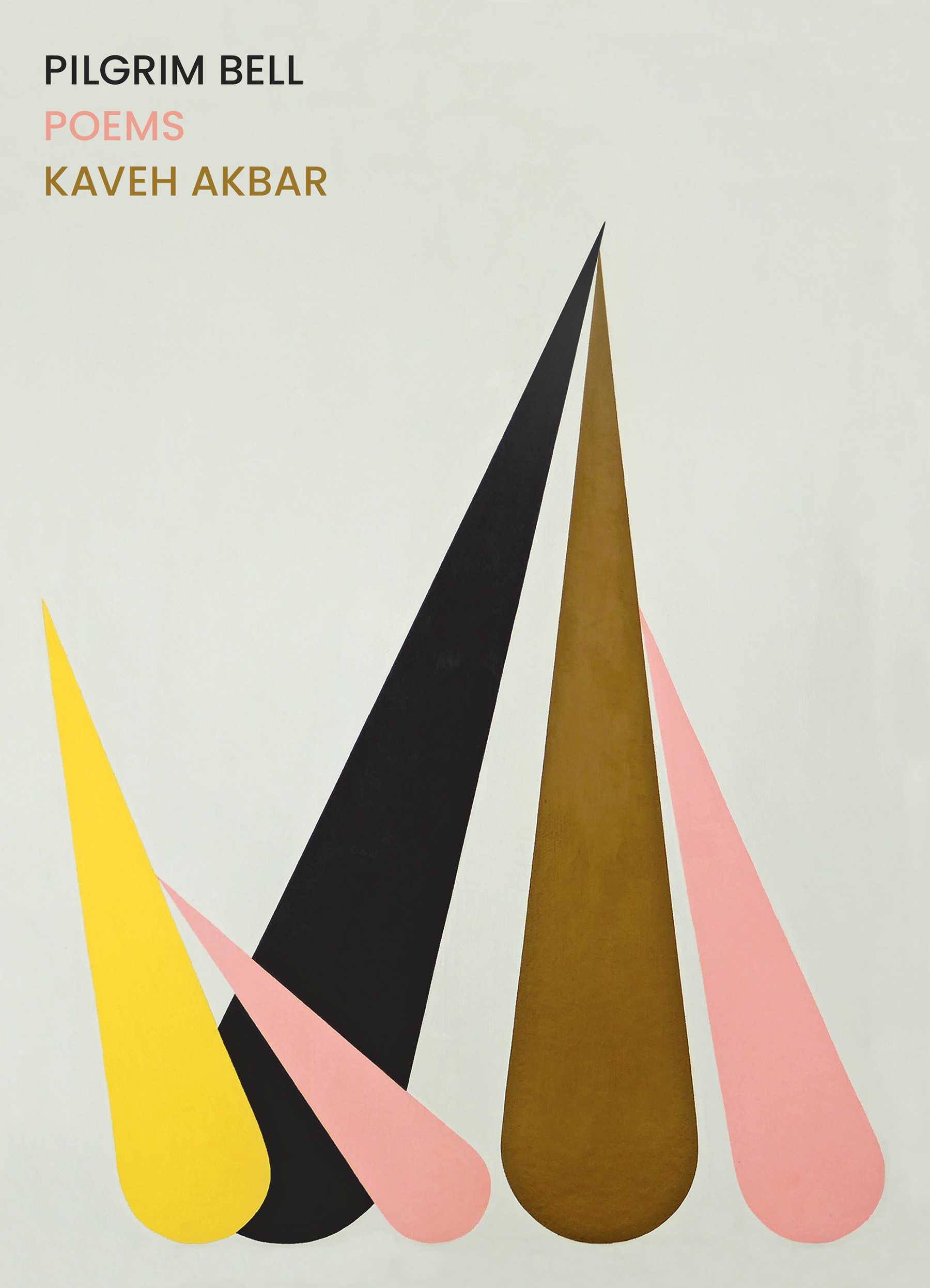 With formal virtuosity and ruthless precision, Kaveh Akbar’s second collection takes its readers on a spiritual journey of disavowal, fiercely attendant to the presence of divinity where artifacts of self and belonging have been shed. How does one recover from addiction without destroying the self-as-addict? And if living justly in a nation that would see them erased is, too, a kind of self-destruction, what does one do with the body’s question, “what now shall I repair?” Here, Akbar responds with prayer as an act of devotion to dissonance—the infinite void of a loved one’s absence, the indulgence of austerity, making a life as a Muslim in an Islamophobic nation—teasing the sacred out of silence and stillness.

Richly crafted and generous, Pilgrim Bell’s linguistic rigor is tuned to the register of this moment and any moment. As the swinging soul crashes into its limits, against the atrocities of the American empire, and through a profoundly human capacity for cruelty and grace, these brilliant poems dare to exist in the empty space where song lives—resonant, revelatory, and holy.

Kaveh Akbar is the author of Calling a Wolf a Wolf and the forthcoming collection Pilgrim Bell. He is also the editor of a forthcoming anthology The Penguin Book of Spiritual Verse. He is the poetry editor at The Nation, and teaches at Purdue University and in the low-residency MFA programs at Randolph College and Warren Wilson. More at kavehakbar.com.